A persistent degradation of the human spirit results from our tendency to take things for granted. Our families, friends and the world around us often seem but background noise distracting us from the business at hand. Perversely we reject the sage advice to stop and smell the roses.

Some people resort to the use of marijuana to directly experience the great splendour of the world. Others might consider this to be a delusional experience but I would argue that it is rather the taking of this wondrous world for granted, as unremarkable, that is the actual delusion. A story from my youth while working on tug boats may illustrate this view.

Tug boat crews are small and they must live and work in a confined space, perhaps for weeks at a time. Needless to say compatibility is a prime issue and when a vacancy occurs in the crew the selection process for the new crew member may be intense.

On one boat when a vacancy occurred the company office supplied a succession of possible replacements but none qualified as a ‘keeper’ and each made only a single trip. The candidate finally accepted by the crew seemed unlikely. While they were fairly red-necked the new deckhand had his long hair in a ponytail and had a number of other hippy traits. His name was Harry and he immediately gained the moniker ‘Hippy Harry’. His amiable manner and great skill as a deckhand won the crew over and they agreed to put up with his weird ways including his habit of smoking a joint most evenings.

During the next year as they made trip after trip along the scenic British Columbia coast most of the crew members became curious and in the end joined Harry in his evening habit. The last holdout was the elderly engineer but even he eventually decided to give it a try. As they lounged in the wheelhouse the joint was passed amongst them and then, for the next twenty minutes or so, the engineer just stared out the window. He finally proclaimed: ‘I have been going up and down this coast for thirty years. I always thought it was nothing but rocks and trees but you know, it is god-damned beautiful’.

This story seems to describe an awakening where the engineer emerges from a 'taken for granted' dream world into directly experiencing and appreciating the wonders of this world. An appreciation of science may also serve as an awakening, as a tonic for staying in tune with the wondrous workings of this world. The scientific method relating hypothesis to evidence is but a means of introducing facts, the actual workings of the world, into our conscious mental models.

During my father’s long career as a health care worker he sometimes expressed his admiration for a few highly skilled doctors he had encountered who were able to make accurate and sometimes subtle diagnoses from merely casual observations, perhaps just viewing someone walking into the room. If we reflect upon this ability it is clear that these doctors, due to their education and experience, have a vast hypothesis space of different diseases and the type of symptoms which are evidence for them. Further they are able to gauge how much plausibility should be assigned to the hypothesis for a specific disease when a given symptom is observed.

Such doctors are also able to adjust the probabilities they have assigned as new evidence becomes available. This scientific path to diagnosis relates hypotheses to evidence following the principals of Bayesian inference which provides the mathematical machinery for adjusting the probabilities assigned to hypotheses on the basis of evidence.

The hypotheses of science come in many different guises from mere guesses to those that are carefully worked out over generations of research. All methods of forming hypotheses involve our imaginative abilities and the advanced rational features of our conscious mind. These areas of the brain are more pronounced in humans than in any other species and have undoubtedly evolved relatively recently. The hypothesis forming centers of our brains are very powerful and have a virtually unlimited scope; we can form hypotheses about what is happening on Mars or imagine phenomena at tens of orders of magnitude both greater and smaller than ourselves. However despite this great power, or perhaps because of it, the hypotheses we form are not always accurate; we can imagine sheer nonsense. Clearly hypotheses themselves do not form a path to knowledge, we have to select amongst them on the basis of evidence.

Evidence enters our mental models through our senses, what we see, hear or otherwise experience from the outside world. The centers of our brain which deal with these sensations and perceptions are shared throughout the animal kingdom and it is evident that human senses are not especially advanced. Our unaided senses have a limited range and scope but natural selection has had hundreds of millions of years to work on these processes and has honed them to a remarkable accuracy. Accurate sensations inform animal behaviour with reliable knowledge of the outside world and have bestowed clear evolutionary advantages on their hosts.

Our sensory abilities, while lacking scope, are much more precise than our imaginative abilities. Science may be viewed as a synergy of these two powerful ways that our brain is able to comprehend the world, a synergy which unlocks stupendous powers. The staggering scale of this power is conveyed by physicist David Deutsch:

Everything that is not forbidden by the laws of nature is achievable, given the right knowledge.

In principle there are no limits to the knowledge which can be accumulated through science. Given that we refrain from using the resultant power to exterminate ourselves we can expect that practically everything not forbidden by the laws of physics will come within our grasp.

The sensory evidence which science uses to check and reign in our imaginative hypotheses itself requires sophisticated mental machinery.  We may think that our senses provide us with a more or less verbatim account of the reality which is unfolding around us but this is far from the truth. For instance vision is based on only a small sample of the light which is scattered from the surface of objects in our vicinity and is subsequently captured by our eyes. Perception must also work around major physiological handicaps like a large ‘blind spot’ in the middle of our retinas where the nerves congregate. Our brain skillfully infers what the world must be like given the scant evidence collected. It is these inferred mental models that we experience as vision. Like those highly skilled doctors our sensory systems are able to infer complex hypotheses on the basis of a little cogent evidence.

In fact our brains arrive at the mental models we perceive in a similar manner to which science arrives at its theories; our senses infer a model of the world, perhaps the model that there is a person next to us, from the evidence it receives. This remarkable coincidence between science and perception provides a hint that there may not be many ways in which knowledge can be accumulated and that nature may use the same method in many different situations.

Our brains themselves are complex organs which have evolved to their present form over hundreds of millions of years. In each generation of animals there are variations in characteristics of the brain and the animals who enjoy the greatest reproductive success tend to be those having the variations which are the cause of that reproductive success. Thus variations are selected on the basis of their experience in the world. This is again remarkably similar to the process we have seen in both science and perception where knowledge is accumulated as hypotheses are selected according to the evidence.

We see this same Darwinian process at work in science: theories are copied, the copied theories contain some variations in their hypotheses, and selection is performed amongst the various hypothesis on the basis of evidence. Indeed numerous philosophers of science have identified science as, in essence, a Darwinian process. Likewise there are numerous theories in neuroscience which identify the formation and selection of sensory mental models as a Darwinian processes. Again we are led to the conclusion that many of the knowledge accumulation mechanisms found in nature are instances of a single process.

Darwinian processes accumulate knowledge because they conform to the mathematics of Bayesian inference: the method by which hypothesis may be inferred from or are supported by the evidence. We can understand Bayesian inference as acting on a set of mutually exclusive and exhaustive hypotheses where each hypothesis is assigned a probability of being true. I am using ‘hypotheses in a very general sense. It may seem strange to think that evolutionary biology, for example, can be seen in terms of a set of hypotheses but we can consider each variant in a biological population as the hypothesis that the variant will enjoy reproductive success. Then the frequency of each variant in each succeeding generation will shift according to the principles of Bayesian inference.

Indeed the basic equation used by population biologists to predict the probability of each variant in future generations is the Bayesian update. It describes the change in frequency of variants in the population under the influence of natural selection:

Bayesian inference adjusts the probability distribution of one generation's variants into a slightly different distribution in the next generation, one which better reflects the evidence or experience gained. In this manner the knowledge gained is retained and accumulates over numerous repetitions of the process.

A persuasive illustration of this isomorphism between inferential systems and Darwinian processes involves a device designed by Francis Galton in 1877 and used in a lecture to illustrate his ideas concerning probability. The device, pictured below, has recently been re-discovered within the statistics community and re-purposed as a visualization of Bayes’ theorem. 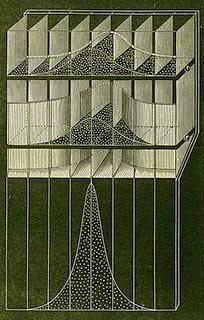 Perhaps the most remarkable thing about this demonstration is that Galton never mentioned Bayes in his lecture; he had probably never heard of him or his theorem. Rather, his purpose in building the device was to demonstrate the principle of natural selection.  The top compartment represents the child generation with variations and the middle compartment represents the individuals selected from that generation.

That this device models both Bayesian inference and Darwinian processes illustrates an isomorphism between the two. The pertinent implication is that any system driven by a Darwinian process is performing inference. The predictive accuracy of its internal model is increased by processing the data available to it, through experiencing the world.

The wondrous and ancient quest to know our world should not be taken for granted. We might recognize it as our destiny and strive to appreciate its significance even when pressed with more mundane day-to-day concerns.

It may be comforting for us to understand that the grand intellectual journey on which humans have embarked does not suggest that we are freaks of nature. Rather we are undertaking nature’s timeless process of knowledge accumulation in the traditional manner.
Posted by John at 09:12 No comments: