John O. Campbell
What are the fundamentals of knowledge? What does it mean to say that one thing knows another thing? Although human knowledge is one of our fundamental defining characteristics we have only scant clues concerning the nature of knowledge.

The academic knowledge industry has largely settled on a definition of knowledge only slightly modified since it was first proposed by Plato: knowledge is justified true belief. In my view this definition suffers from a possible implication that only humans may have knowledge. However if we loosen the meanings of ‘belief’ to include non-human expectations and narrow the meaning of ‘justified’ to ‘justified by the evidence’ I cannot quibble with this definition. 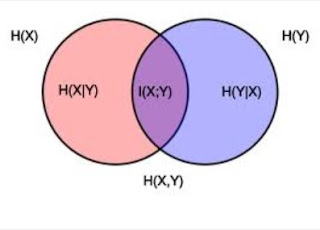 
From a human perspective there seems to be a maximum amount of mutual information we can share with any other entity. Even those who we love most dearly largely remain mysteries. In many respects our inner selves are quite isolated; we are unable to effectively communicate very much of our wondrous complexity.


One view of this problem is that to know something requires a mental model of it. The degree to which this model reproduces the known thing is the degree to which we know it. However the world around us is much more complex than our individual human brain; it includes numerous other human brains as well as numerous other complex entities. Our mental models can be at best only rough sketches of the true reality.

Recent neural research shows that mental models consist of a hypothesis space which divides the possibilities into an exhaustive and mutually exclusive list of hypotheses and assigns probabilities to each. As new information is received the probabilities are updated in accordance with the support their respective hypotheses have received from the new information or evidence. This Bayesian brain school of neuroscience has succeeded in explaining many of the brain’s mysteries.


Perhaps unsurprisingly it turns out that our brains are most adept at gathering knowledge concerning other members of our species. In a way this is to be expected as we are best suited to know other things that are similar to ourselves but the mechanics may be surprising.


The brain contains families of ‘mirror’ neurons. When for example we observe someone smiling a family of neurons in our own brain fire. This is the same family of neurons that fire when we smile and are correlated with the emotions we have when we smile. Thus we gain understanding of the other person’s mental state; on the basis of this information we judge some hypotheses concerning the other person as more likely and others as less.


This brilliant mechanism in some ways enables us to know others as we know ourselves. There are however ambiguities. Even our self-knowledge is incomplete and a smile by itself is somewhat ambiguous; it could mean many things.


We are not alone in our problem of knowing. Another view of this conundrum is at the level of fundamental physics. Here we see that information can be transferred between entities in only four ways, through the four quantum forces of nature. For example when we see someone smile the information is transferred from the reflected light to our visual system via a quantum interaction in our retina.

Quantum information transfer is hugely constrained. Only a minute portion of the information that would fully describe a quantum system may be transferred to entities in its environment. Quantum systems too are isolated.


Quantum systems may be modelled in a hypothesis space or state space which is the set of density matrices on N-dimensional complex Hilbert space (ref.: Information-theoretic postulates for quantum theory). This technical description conveys some of the mind boggling complexities of quantum systems; the density matrices are hugely complex and the Hilbert space may approach infinite dimensionality.
Information transfer between quantum systems and their environment takes place through communication channels, the nature of which are beginning to be unravelled. It appears that information regarding only a very small subset of the quantum complexity may be transferred through these channels and that subset consists of a simple probability distribution, it is the same probability distribution which quantum theory provides for the outcome of measurements on quantum systems (ref.: No-local-broadcasting theorem for quantum correlations).

We may now see quantum theory in a new light. Our physical reality is based on quantum systems; however quantum systems are weird and spooky compared to the logical and familiar classical world we inhabit. This situation exists because we (and all other classical entities) may only experience a very small subset of the quantum world, just a few measurable attributes,  and again this knowledge is in the form of probability distributions. These probability distributions form our best model and the best knowledge we may have of the quantum reality.


A further interesting point is that quantum communication channels can be viewed as selection mechanisms; only certain aspects of the quantum system can survive the transfer to the system’s environment. In this sense quantum information transfer may be seen as a Darwinian process as described by the theory of quantum Darwinism (ref.: Objectivity Through State Broadcasting: The Origins Of Quantum Darwinism).

Once we note that life, neural models and cultural knowledge such as science may also be best understood as evolving via Darwinian processes, we are led to the stunning conclusion that reality is at base a nested hierarchical system of knowledge accumulation mediated by Darwinian processes.

While knowledge is by its nature always incomplete and we may not be fully known to any other entity, we may gain some solace from understanding that the rest of reality is in the same boat with us. As our knowledge is based upon forms of quantum, biological, neural and cultural knowledge we should understand that the reason we may see further than other natural entities is because we are standing on the shoulders of giants.
Posted by John at 18:31 No comments:

Interpretation of quantum theory has seemed largely moribund for most of the past 50 years. Other than extensions of the theory explaining the three types of quantum interactions or forces little of fundamental importance has occurred.

While the practical application of quantum theory has probably been the most successful in the history of science the theoretical problems with quantum theory remain monumental. These problems revolve around the quantum wave function, the mathematical object which the axioms underlying quantum theory tell us is the source of all knowledge concerning quantum systems.

Most theorists who have attempted an interpretation of the wavefunction have concluded it to be a statistical tool for calculating probabilities having no physical existence. This spooky interpretation of quantum theory was decried by Einstein but 70 years on little in the way of clarification has been offered.

The belief that the central mechanism in a branch of science might have no physical existence has an interesting history. In the early 1900s while developing the work of Gregor Mendel, William Bateson coined the term ‘genetics’ within the study of biological heredity. However Bateson considered the ratios which Mendelian genetics conferred to be mere mathematical calculation devices. At the time it was the consensus view (Hull, 1988):

Similarly, as much as Bateson might disagree with Pearson and Weldon about the value of Mendelian genetics, he agreed with them that it was unscientific to postulate the existence of genes as material bodies. They were merely calculation devices.

When the mechanisms involved lie beneath the resolution that current technology is able to detect, when there is no direct physical evidence, we might expect that weird and spooky notions might come to prevail.

The major exception to a lack of progress within quantum theory has been, I believe, the research program of Wojciech Zurek. Zurek has largely solved, the ‘measurement problem’ which was a large thorn in Einstein’s side. His development of ‘decoherence’ has detailed the mechanism of wave function collapse and shown it to be the expected mechanism of information transfer between a quantum system and its environment. This is the unique method of information transfer from quantum systems to the environment and the information which is transferred is purged of quantum weirdness and composes our familiar classical reality.

Although Zurek’s work on decoherence is now perhaps the consensus view his theory of Quantum Darwinism has been largely ignored. This is unfortunate as I believe his theory is key to removing the weirdness and spookiness from quantum theory and placing it within the naturalistic theories of science.

Last year the physics community was roiled by a paper, On the reality of quantum states, which argued that the wave function is physically real, that it has an ontological existence. As reported on the journal Nature’s website:

At the heart of the weirdness for which the field of quantum mechanics is famous is the wavefunction, a powerful but mysterious entity that is used to determine the probabilities that quantum particles will have certain properties. Now, a preprint posted online on 14 November1 reopens the question of what the wavefunction represents — with an answer that could rock quantum theory to its core. Whereas many physicists have generally interpreted the wavefunction as a statistical tool that reflects our ignorance of the particles being measured, the authors of the latest paper argue that, instead, it is physically real.

Last week a paper was published connecting the reality of the wave function with the theory of Quantum Darwinism (Korbicz, Horodecki, & Horodecki, 2013).  From the paper’s abstract:

Quantum mechanics is one of the most successful theories, correctly predicting huge class of physical phenomena. Ironically, in spite of all its successes, there is a notorious problem: how does Nature create a ‘bridge’ from fragile quanta to the robust, objective world of everyday experience? It is now commonly accepted that the most promising approach is the Decoherence Theory, based on the system-environment paradigm. To explain the observed objectivity of information in the classical realm, Zurek proposed to divide the environment into a number of independent fractions and argued that each of them carries a nearly complete classical information about the system. Here we prove that the necessary and sufficient condition for objective existence of a state is the spectrum broadcasting process, which, in particular, implies Quantum Darwinism.

Definition 1 (Objectivity)
A state of the system S exists objectively if ”[...]many observers can find out the state of S independently, and without perturbing it.”

While an objectively known entity may not have a guaranteed ontological existence this latest result does add support to that notion:

It appears, at least to this observer that advances in quantum theory are now accumulating at an accelerating rate. Further, it appears that these advances are lending support to Zurek’s initial vision of quantum processes as mechanisms within physical reality which operate as Darwinian processes. I am hopeful that if these trends holds true our interpretation of quantum processes may soon lose its exotic nature and join the rest of science as a naturalistic process.
Posted by John at 14:45 No comments: