Awakening from the dream

Woke has recently entered the English language - a new word of somewhat ambiguous meaning loosely describing our awakening from a xenophobic dream of traditional values that lead to social inequalities. This concept is so threatening to the status quo that one U.S. state passed legislation banning its teaching. A judge reviewing that law ordered an injunction commenting that under this legislation:

professors enjoy ‘academic freedom’ so long as they express only those viewpoints of which the State approves. This is positively dystopian.

This ruling is under appeal, and it remains to be seen if the full force of the state will be arrayed against this nascent awakening.

Since the dawn of civilization to the recent past, the world’s cultures were well served by the xenophobic dream. Outsiders truly posed existential threats. Researchers claim that the great religions, coming into existence along with the first western civilizations, increased martial power by uniting large groups and adapting culture to better endure.  And religious exceptionalism was soon joined by assumptions of racial superiority, male dominance, heterosexuality, and dominion over nature to be woven together in an all-encompassing dream conferring martial confidence and determination. Often this dream is called tribalism, but more accurately it is a cultural adaptation institutionalized and developed in the context of civilizations rather than tribes.

But history moves on and as martial existential challenges fade, other, more immediate ones arise, transforming this traditional dream into a delusion holding us transfixed and helpless. Our new-found vulnerability induces insecurity and discomfort as we awaken from this dream.

A dream of tribalism has understandable roots deep in our historical past. For fifteen hundred years prior to the end of WWII, Europe was a particularly nasty hotbed of small, viciously warlike states, each learning the hard way that societies only survive if they effectively unite in martial campaigns against hostile neighbors. And we learned that others, those that did not share our society’s characteristics, were evil and would annihilate us given the opportunity.

When Europeans were not fully involved with internecine warfare, they unleashed a particularly savage martial assault upon other cultures, particularly in the new world and Africa. But with the rise of a closely connected global village boasting nuclear weapons, it has become clear that our continued survival now depends on finding a better way – one that welcomes others, even those not sharing our strict social norms, and draws on the strengths of this diversity to solve current challenges. Figure 1:Performance group Pussy Riot urges us to awake from the male centric dream and recognize women as equal partners.

I was extremely lucky to be raised in a liberal household with parents who had already developed a semi-woke perspective. Equality, in its many guises, was a family commitment. But I, along with my parents, continued to see nature mostly as a human resource, exploitable without regard for possible consequences. Over the past couple of decades this has come to me as a woke revelation - my recent commitment to nature, one that I now take very seriously, is a personal awakening from the delusion of human dominion over nature. And this revelation is the product of a life-long search for a believable story of our place in the universe. Beginning with explorations in religion, the supernatural, and the humanities, my search has come to focus on scientific explanations as they are easily the most believable of those on offer. 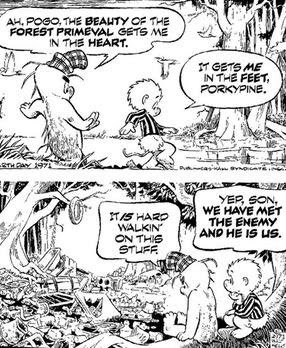 But composing a scientific story of how we came to occupy our place in the universe is not straight-forward. Science has a bias against such stories. It shuns epic stories of struggle and survival, preferring instead objective accounts of what is. And attempting to forge a wondrous tale from scientific understanding is difficult. Fortunately, we are entering the information age where all scientific explanations must be revamped to include the basic concepts of information and knowledge. And part of this revamp is a scientific examination of the general concept of existence, including human existence.

For example, the free energy principle (see a previous post), is rapidly developing the explanation that all existence is based upon actively inferred solutions to existential problems. We might consider the existence of animal behaviour as learned responses, inferred from sensory inputs with the goal of maintaining the animal’s existence. Or we might consider all life forms as bundles of adaptations, inferred through natural selection, each with the goal of maintaining the lifeform’s existence. The free energy principle views all forms of existence as this kind of dynamic struggle, as examples of inferential responses to existential challenges.

And that includes the existence of cultures or societies. Cultural evolution might be seen as a long march of inferred solutions, from stone tools to artificial intelligence, always with the goal of assisting cultural existence. Tribalism is undoubtedly one such solution, successful in aiding survival for many millennia, but it is a solution to yesterday’s problem, and yesterday is gone. We awaken from that dream to find ourselves in a new day, poised to use the enormous strength of our diversity to solve the mounting existential crisis that have arisen during a prolonged spell of tribalistic dreaming.

But, for me, the great bonus of this informational scientific perspective is the story it tells of our place in the universe and of inference as the sole solution to existential problems. Inference requires the context of models for constructing existing things and evidence for updating the model. Using a biological example, inference occurs in a two-step process, where first the (epi) genetic model infers the phenotype through the processes of developmental biology and second the evidence of phenotypic success infers the genetic model through natural selection.

We are truly part of nature and involved in the same epic struggle as the rest of nature – securing a place within existence. But we have a great deal of individual significance within this universal setting. Although we participate along with many other entities in physical, biological, and neural processes, humans alone also participate in cultural processes[1]. Culture is a unique process or form of existence, grown out of other forms and following the same logic. Using our cultural prowess, our models can join the immense scale of the observable universe to the microcosm of particle physics and the wonders of biology to tell our story of existence. And our future lies in the power of this diversity, in understanding that we are one with it. Only knowledge and inference can take us to the stars or avoid catastrophe by ensuring the evolutionary integrity of earth’s many interdependent species.

We and every other existing lifeform descend from the same last universal common ancestor (LUCA). LUCA is our great- great- great … grand parent and that makes us all cousins. We share the same heritage; we are one tribe. These ties demand our allegiance as we awake and prepare to fight for our family’s survival. But this is not conflict with a belligerent outsider; rather these lethal perils are the unintended consequences of our own actions. And meeting these challenges requires the full strength of our diversity; it requires our very best game. To remain transfixed in delusion only renders us unfit, placing us on the path to non-existence.

We must fight for our tribe’s existence, as natural entities have always fought - intelligently, inferring optimal responses to existential threats. Tribalism and struggle remain the order of the day, but we awake this day to find ourselves within a wonderfully large and strong tribe.

[1] Some animals such as chimpanzees participate in rudimentary cultural practices, but only human culture has proven capable of a sustained accumulation of cultural adaptations – of cultural evolution.