This post is the concluding section of the book: Einstein's Enlightenment.

Although Albert Einstein was both a scientific genius and a spiritual seer, his largely unappreciated virtuoso achievement may have been the unification of these two visions, the unification of God and nature. He envisioned an essentially spiritual science; one, which progressively reveals the nature of God. 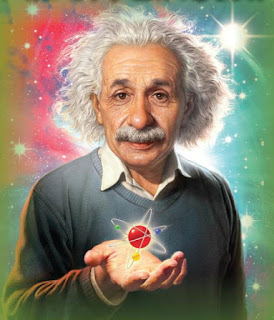 In the more than 60 years since his death, few attempts have been made to develop his vision. It is a testament to his foresight that he visualized a science consistent with the spiritual revelations of the natural world and it may only be now that scientific advances have caught up to this great insight and are able to facilitate a fuller explanation.
Richard Dawkins famously quipped that (1):


However many ways there may be of being alive, it is certain that there are vastly more ways of being dead.

What he is alluding to is the fact that being alive is dependent upon a unique form of genetic knowledge. Most of the many possible ways of randomly varying genetic information result in specifications for things that do not live, which do not exist. Biological existence is a rare state and those rare states are entirely reliant on the specifics of genetic knowledge.
As we have discussed in this book, this same relationship between knowledge and existence is true not only in biology but throughout nature. We may say:


Knowledge is the creator and sustainer of all things.

Knowledge is a component of inferential systems. It is inferred from evidence and accumulates within memory stores. This single source of knowledge production underlies the many forms of existence. We may say:


There is but one universal source of knowledge.

A nested hierarchy of knowledge supports existence at many levels. All existing forms achieve their existence by making use of knowledge available at one or more levels in this hierarchy. Only human existence is dependent on all levels of this knowledge hierarchy: physical, biological, neural and cultural. This makes us unique in embodying a greater range of knowledge than any other known existing entity. We may say:


Humans were created by this universal source of knowledge and are the most advanced form of knowledge yet found in the universe.

Einstein’s Enlightenment is unique in offering a grand unification of science and spirituality.  Einstein summed up both the necessity for unification and the inadequacy of either an insular science or spirituality (2):


Science without religion is lame, religion without science is blind.

The essential flaw in supernatural belief is that it limits our view to mere trivialities. It is not supported by evidence and hence is confined to the undisciplined bounds of our narrow imaginations. If instead, we confront the growing body of scientific evidence, we are forced to move beyond these confines and continually develop new explanations that encompass the evidence; we are compelled to develop and explore new spiritual vistas as God’s handiwork is revealed further.
The universe has evolved to a sublime and wondrous state; all manner of intricate and sophisticated entities has been brought into existence. Our untutored imagination is not capable of directly grasping these wonders, rather they must be pondered and our imaginations stretched to encompass them. We must puzzle over the evidence and slowly come to infer the true marvels of nature. As the philosopher Daniel Dennett writes (3):

There is simply no denying the breathtaking brilliance of the designs to be found in nature. Time and again, biologists baffled by some apparently futile or maladroit bit of bad design in nature have eventually come to see that they have underestimated the ingenuity, the sheer brilliance, the depth of insight to be discovered in one of Mother Nature's creations.

It is not possible to simply imagine such splendours. In fact, biologists have enshrined the relative weakness of our imaginations as Orgel's Second Rule: ‘Evolution is always cleverer than you are’.

The supernatural is usually portrayed as ‘timeless’, having a static existence beyond the reach of time, but this merely serves to limit its grandeur. It is not a vision capable of evolving along with our growing knowledge.


As the supernatural springs from our uniformed mind it tends to invent beings very much like our mere selves. We have a particular fondness for Gods in the guise of stern paternalistic bearded fellows who bear a strong resemblance to our great-great-grandfathers.

These are paltry Gods that bear little relation to the cosmic wonders revealed by science. In contrast, the God of Einstein’s Enlightenment embraces these cosmic wonders and provides deep spiritual insight into their nature. It is now possible to remediate our God as a more sacred being which reconnects us with the ancient wisdom composing nature. Indeed, through the window of science, we may view God as nature in all its awe and splendour.


On the other hand, the essential problem with strictly materialistic science is that it is dated; it ignores the recently understood importance of information and knowledge. It is now clear, on all levels, that matter is orchestrated and animated by knowledge. But in Einstein's time mechanisms, without any cognitive abilities, were the prevailing metaphor for natural systems. Einstein had the insight to see beyond this to natural systems based on a deep intelligence:
rapturous amazement at the harmony of natural law, which reveals an intelligence of such superiority that, compared with it, all the systematic thinking and acting of human beings is an utterly insignificant reflection.
Much of the scientific theory supporting the spiritual principles of Einstein’s Enlightenment is neither novel nor controversial. Much of it forms the consensus of core fields of study such as biology, neural-based behaviour and cultural evolution. It is my interpretation of these theories within a spiritual context that may be more controversial.

It explains the evidence equally as well as rival interpretations so we must look to other criteria to judge its merit. When weighing these types of competing theories or interpretations we should choose from among them based on Occam’s razor; we should choose the simplest one, the explanation which is least complex, which involves as few variables and assumptions as possible.


In comparison to its rival scientific interpretations, Einstein’s Enlightenment is extremely simple. Inferential systems, in many different guises, create all knowledge and sustain all existence. This unified principle cuts across the many scientific disciplines and replaces their fractured areas of study, each having its own specialist jargon and unique concepts, with a common set of concepts and mechanisms.


The simplicity of Einstein’s Enlightenment is almost complete. The internal model of an inferential system predicts its existence, and the inferential system acts to minimize the prediction error of its model. Thus, we are close to a tautology; only those entities that act to ensure their existence may exist.

When we are faced with competing interpretations we have some personal freedom in those we adopt. We should be scrupulous in selecting those that explain the evidence and we should give some weight to choosing on the basis of simplicity. Beyond that, we have freedom to choose based on the personal clarity they provide, on the basis of the personal insights these choices bestow upon us.
Great clarity is often achieved during spiritual experiences of cosmic religiosity. We can but second Einstein’s hope that his Enlightenment will ‘awaken this feeling among the receptive and keep it alive’ (4).