Wojciech Zurek’s highly productive career unravelling quantum mysteries spans thirty-five years and places him among the greatest living quantum theorists. As a result he is the top pick of a Scientific American blog for the Nobel Prize in physics (1). One of his most noted accomplishments is the discovery of the mechanisms of quantum interactions or of quantum decoherence.

This is perhaps a shocking choice for the naming of a fundamental physical theory. Traditionally physicists have expressed a good deal of disdain for biologists, often considering them mere ‘stamp collectors’ or scientific wannabes. Biologists responded by donning clipboards and lab coats in an attempt to ape the harder sciences. It is therefore surprising that a leading physicist would borrow the central biological paradigm in naming a fundamental theory.

After ten years of development by Zurek and a small group of collaborators, it seems obvious that this theory is both correct and an intellectual milestone of scientific understanding. Also, perhaps due to its biological condescension, it has been largely ignored in the scientific literature as well as in the press. Due to its biological taint many physicists seem unable or unwilling to consider it as a serious proposal.

Given this situation, Zurek’s insights into biological theory and his courage in naming this physical theory are remarkable. How did this career physicist come to have such respect for biology? Zurek has addressed this specific question and the short answer is that he inherited much of it from his mentor, the great physicist John Archibald Wheeler (2).

This was symptomatic of the role theme of evolution played in John’s thinking about physics (see, e.g., Wheeler’s ideas on the evolutionary origin of physical laws). While I was always fond of looking at the ‘natural world’ in Darwinian terms, this tendency was very much encouraged by John’s influence.

It seems quite natural to look at the emergence of the classical as a consequence of a quantum analogue of natural selection. Last not least (and on a lighter note) while my wife Anna and I were visiting John on his ‘High Island’ summer estate in Maine, we were put up in a cottage in which – I was told – James Watson wrote “The Double Helix”...

Wheeler was lead author of the most electrifying scientific textbook I have ever experienced: Gravitation. Although this treatise on general relativity was published only eight years after the Big Bang model had been experimentally confirmed, the historical nature of the universe permeates the book (3):

Since the discovery of the cosmic microwave radiation in 1965, extensive theoretical research has produced a fairly detailed picture of how the universe probably evolved into its present state.

The adoption of Big Bang cosmology marked a revolution in physical thinking. The previous consensus theory was the ‘Steady State’ model where the universe had remained largely the same since the beginning. The notion that the universe had a historical context and had perhaps even ‘evolved’ opened up a new realm of understanding and explanation.

Providing the universe with an historical context allowed us to understand it in the traditional manner; ‘things are the way they are because of how they got that way’. This is the common-sense way we explain most things from who we are as mature individuals to explanations for the current state of our car. However it was new to physics which had mouldered in the Newtonian paradigm of given initial conditions and timeless laws, both of which are inexplicable within the theory itself.

Zurek also notes the curious fact that Wheeler had only two pictures on his office walls and both were portraits: one of Lincoln and one of Darwin (2). These two great men may seem a disparate combination. However, I would like to speculate upon a possible commonality that Wheeler may have perceived and appreciated: the importance each ascribed to our historic heritage, our formation by the past, which they considered essential aspects of life. 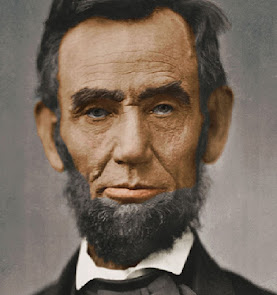 Lincoln felt compelled to order the greatest spilling of blood in American history due to his commitment to the historic perspective. At the dedication of the Gettysburg National Cemetery, commemorating fifty thousand casualties in a single battle, he made a short speech of only 273 words, one that left an indelible mark upon the world. He started by recounting a historical event:

Four score and seven years ago our fathers brought forth on this continent a new nation, conceived in liberty, and dedicated to the proposition that all men are created equal.

The point of Lincoln’s short address was that the preservation of the wondrous aspirations expressed in the American Declaration of Independence were so important to each American that they justified the deaths of so many. He was girding the nation to make even greater sacrifices so that:

this nation, under God, shall have a new birth of freedom—and that government of the people, by the people, for the people, shall not perish from the earth.

Here was an assertion that the historical course which America had taken towards democracy was of even greater value than the lives of hundreds of thousands of its citizens. Humanity's road from autocracy towards democracy has been a long historical process with the majority of its more modern milestones taking place in America and Britain (4). Lincoln’s Gettysburg Address was one such milestone and another was the decision of Britain to defy the Nazi menace in WWII, alone and against seemingly overwhelming odds.

Following the fall of France in 1940, many in the British establishment believed the only reasonable course was to make a deal with Germany, to negotiate a conditional surrender. Winston Churchill, himself a historian, saw clearly that a deal with Germany would mean surrendering the most important aspects of being British, the most essential parts of British life that had slowly developed over a thousand years. Perhaps surprisingly the opposition to Churchill was strongest among the political elite in the government cabinet. The House of Commons, as well as the average Briton, wildly endorsed his resolve to ‘fight them on the beaches’ and enthusiastically rallied to the cause.

But if we fail, then the whole world, including the United States, including all that we have known and cared for, will sink into the abyss of a new Dark Age made more sinister, and perhaps more protracted, by the lights of perverted science.

Let us therefore brace ourselves to our duties, and so bear ourselves that if the British Empire and its Commonwealth last for a thousand years, men will still say, 'This was their finest hour.'

Charles Darwin was another Briton who introduced a revolutionary historical perspective. His focus was biological history rather than cultural history. Before Darwin biological thought was largely constrained by Christian scripture. The consensus interpretation of Biblical teaching was that God had created all species in 4004 BC[i] and those species had remained static since.

Some, such as Robert Chambers and Darwin’s own grandfather Erasmus Darwin, had suggested that species may have evolved but no one prior to Charles Darwin was able to describe a convincing mechanism for this evolution. Darwin’s theory of natural selection has extended our historical context from culture to biology, it extended our family relations from mankind to all organisms, and it extended our historical context to 3.5 billion years.

I believe Wheeler may have appreciated this commonality between Lincoln and Darwin. He was certainly enthusiastic about pushing the historical limits of the universe even further to 13.5 billion years with the Big Bang theory. However neither Wheeler nor any other physicists was able to suggest a mechanism by which the universe had evolved.

He was among the first to understand that information is, perhaps the most fundamental aspect of the physical world. Indeed all physics depends upon the transfer of information in the form of one of the four fundamental physical forces. Each of these forces are understood in terms of quantum interactions and now Wojciech Zurek has shown that these quantum interactions take place through a Darwinian process.

All physical forms are described by their quantum interactions and these include even biological organisms and cultural structures. While these process may be guided by higher order principles such as natural selection, at bottom they also conform to the principles of Quantum Darwinism. In this view we are composed of and have evolved from a nested hierarchy of related structures: cultural, behavioural, biological and physical. Our own direct historical lineage extends to the beginnings of the universe and we are the recipients of a wondrous historical heritage.

Many paleontologists and anthropologists describe our planet’s current historic epoch in terms of a sixth mass extinction. A mass extinction is considered to have occurred in earth’s history when more than 50% of its species become extinct during a short period of time. Five such events have been identified in our previous history. All five cases involved natural agents, such as a meteorite collision or extensive volcanism. This sixth case is different, the agent involved is us. In some sense we cannot be blamed, many of us do not recognize our close familial relationship to all the other organisms on the planet.

However the fact remains that we are inadvertently but actively exterminating our cousins in the family of life. Hopefully some Lincoln or Churchill will emerge to remind us of our duty to safeguard our great historic and familial heritage. Hopefully we will rally to them and ensure that no more of our extended family or our historic heritage shall perish from the face of the earth.

[i] After careful study of Biblical chronology, Archbishop Ussher set the date of creation at 4004 B.C.
Posted by John at 21:21 No comments: