Following the FEP to self-actualization

Looking back over a long life, my efforts at self development or self-actualization appear meandering and ineffectual. Where did I go wrong and what might I have done to navigate a more direct course? At long last I may have found an answer – one that might be of some utility for those setting course towards this destination.

But first, a quick review of the goal. What is self-actualization, or as some call it, self-authenticity?

Perhaps its roots in western philosophy extend to Friedrich Nietzsche (1844–1900) who is largely remembered for his pronouncement that God is dead and esteem for the will to power and for supermen. These memes may seem incongruent with self-actualization but when properly understood they reinforce it. Nietzsche was an atheist and viewed religious indoctrination of the young as one of the main barriers to their formation of authentic worldviews, a necessary accomplishment for a strong moral character or a ‘superman’ who would be immune to the herd mentality. Having studied Darwin, he concluded that Christianity had lost its hold on humanity and that this offered potential for self-actualization as well as terror at being cast adrift in an unfamiliar universe.

This theme was developed by existentialist philosophers of the mid twentieth century, perhaps reaching its culmination in the writings of the great humanist psychologist Abraham Maslow, best remembered for introducing a hierarchy of human needs and placing self-actualization at its pinnacle. 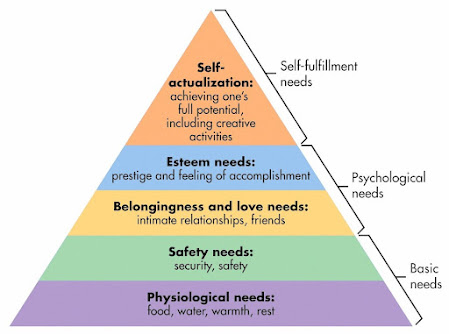 Young adults, especially students have long been prone to rebellious tendencies. A natural urge towards freedom drives young adults to cast off the social constraints imposed by prior generations in forms such as religion and strident demands of a consumer society in favour of developing one’s true self. But the road to freedom is not easy and after a few years of the highs and lows of turning on, tuning in, and dropping out, for example, many revert to more traditional world views.

What has been lacking is a reliable road map that might aid us in our journey towards freedom and self-actualization. Well, science may now have provided an answer, in the form of the variational free energy principle (FEP). In a nutshell the FEP, developed by renowned neuroscientist Karl Friston, states that all existence depends upon reducing the surprise or difference between an entities model for existence and its experience in achieving existence. This can be done in two fundamental ways, either make the model closer to reality or cause reality to follow the model more closely.

We may illustrate these two methods as a cyclical process where entities are created through the autopoietic process of carefully following the model and then the entity’s experience in achieving existence is used as evidence to update the model in a Bayesian manner. For example, the model underlying biological existence might be the inherited genetic and epi-genetic model, autopoietic creation takes place as described by developmental biology, the existing entity is the resulting phenotype and the experience of the phenotype in achieving existence updates the model through natural selection. This describes an evolutionary process where knowledge for more resilient forms of existence is accumulated in the genetic model (Campbell 2022).

So, what could this have to do with self-actualization. Well, a self-actualized person is an existing entity whose evolution is described by this paradigm. Her model is her world view, including plans and expectations for her life - the self she strives to be. Her autopoietic self-creation occurs through faithful adherence to her model - she attempts to follow her life plans and these attempts result in an actual self that may conform to the plan in some areas and deviate from it in others. And this experienced actual self provides a test of her model or life plan that she may use to update and fine-tune it. Best of all this is an evolutionary process; over many cycles she continuously approaches the person she envisions in a process of self-actualization.

One extremely important recent finding is that over time, evolving under the FEP, the model becomes ever closer to the world it is modelling (Fields et al, 2022). And applied to self-actualization this might imply the eventual realization of Maslow’s goal of self-transcendence – becoming one with the world.
But wait a minute, how could an abstract scientific model lead to self transcendence? In part the answer might be that the FEP is moving from the realm of scientific abstraction to the realm of natural processes, one capable of typifying all other natural processes. If we were to align our self development with this process, we could begin the long journey of connecting to the world and cognitively merging with it.
References