Our belief in hypotheses based on the evidence is fundamental to science and to the logic of induction. The logical relationship between scientific belief and evidence is contained in the logical statement: H implies E which roughly translates to: given that a particular hypothesis is true some particular evidence is predicted. This has two logical consequences:
The mathematics that fully relates hypotheses and evidence is the field of Bayesian inference which has come to be known as ‘the logic of science’.

A fundamental aspect of Bayesian inference is the notion of a hypothesis space or a model. Such a model is an exhaustive set of mutually exclusive hypotheses. This means that within the context of such a model one and only one of the hypotheses in the set is true. It also means that the plausibility of any hypothesis may be assigned a numeric probability and that the sum of these probabilities over all the hypotheses making up the model must be 1. Bayesian inference provides the mathematical machinery to re-weigh these probabilities among the hypotheses when new evidence becomes available.

This scrapping of old models and building new ones that better reflect the data is a major means by which science evolves. There are many examples but an illustrative one concerns the discovery of the planet Neptune in 1781.

The highly successful model of the solar system in place at the time included the known celestial bodies acting according to Newtonian gravity. On its discovery Uranus was included in this model and predictions of its future trajectory were made. All of the hypotheses within the model concerning Uranus’ future trajectory described a highly constrained path so it was extremely surprising that before Uranus had completed one third of its orbit around the sun it had become clear that its measured orbit was contrary to the model. The model had to be revised.

There were really only two options: either Newtonian gravity was wrong or the configuration of celestial bodies placed in that model was wrong. Astronomers were very reluctant to give up Newtonian gravity as it had proved exquisitely accurate in every tested instance to date. The other option was more appealing and two astronomers worked backwards to determine what change to the model of celestial bodies would result in a prediction of the measured orbit of Uranus. This calculation suggested the model would work perfectly if there were another undetected planet at a given position.

Astronomers turned their telescopes to the suggested position and discovered the planet Neptune. Neptune was then included in the scientific model of the solar system, thus making the model even more predicatively accurate. 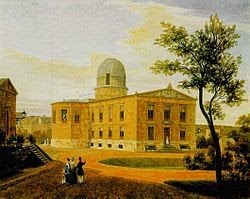 
On the other hand surprising evidence can sometimes result from something wrong with the ‘evidence’ itself. In fact this surprise is the usual crowd pleasing effect of ‘magic’ and ‘conjuring’ tricks. A similar sensation is also produced by ‘evidence’ for other claims of the supernatural such as ESP.

Many of us, however, have some immunity to the incredible evidence presented by conjurers. We suspect that their evidence may be somewhat deceitful, that it may be the result of something other than what is presented to us. We entertain the possibility that we may have been tricked, and with good reason.

A number of history’s most accomplished magicians including Harry Houdini and James Randi, dedicated the later parts of their careers to debunking claims of evidence for the supernatural. Indeed Houdini exposed every claim he investigated as a kind of deceit; where the evidence presented was either knowingly or unknowingly deceitful. Sometimes there were secret ‘experimental setups’, such as mirrors hidden from the audience. Sometimes the magician or clairvoyant and their subject were in cahoots.

The principle designed to exclude such types of evidence from science is the principle of repeatability. When scientific results are published the experimental methods which led to them must also be published. Using these methods other experimenters may perform the same experiment. If they get the same results the original findings are confirmed. If they get differing results then the original findings are in dispute. This practice contributes to the objectivity of science.

Susan Blackmore, a British psychologist, spent much of her early career researching ESP. Her motivation was due to the great fame that would be bestowed upon anyone finding scientific evidence for ESP and the numerous foundations which generously funded scientific research on this subject. More than a decade of conducting experiments designed to replicate evidence claimed for ESP produced no data in support of this phenomena. Eventually Blackmore gave up and moved her focus to more promising areas of research.

In 1954 evidence was reported in the scientific literature purporting to prove the ESP abilities of a Mrs. Stewart. An experiment, having purported meticulous experimental design, had been conducted by S.G. Soal where Mrs. Stewart ‘guessed’ the identity of one of five randomly shuffled cards. On the basis of pure chance it would be expected that she would guess correctly with a probability of 1/5 but over 37,100 trials she guessed correctly about ¼ of the time.

This ‘proof’ of the existence of ESP consisted of the correct observation that in a model where Mrs. Stewart’s result must either be due to chance or to ESP the likelihood of it being due to ESP was 10139 times higher than it being due to chance. This conclusively proves the existence of ESP within the context of the model. However we might also question if the model dices up reality in a consistent manner. The model does not include the hypothesis that the evidence is ‘deceitful’. It is historical fact that every single claim of such phenomena in the past where the experimental methods were investigated and the experiment repeated either the methods turned out to be deceitful or the evidence was not repeatable. The possibility of deceitful evidence should always be reflected in a model's hypotheses. The probability of this hypothesis will depend on the repeatability of the evidence.

It has subsequently been shown that Soal actually faked his published evidence:

Marwick showed that there had been manipulation of the score sheets and that therefore "all the experiments reported by Soal had thereby been discredited." His meticulous experimental design was an illusion (Hansel 1989: 115).

Intuitively we tend to be on the lookout for deceitful evidence. When someone uses some ‘evidence’ to make an argument, especially one contrary to our beliefs, we almost always entertain the possibility that the evidence is deceitful in that it may not be valid evidence or that it may only seem to support the argument.

We all have deeply embedded beliefs about the variability of the climate; we expect it to remain within certain bounds in the future, roughly we expect it to remain within the bounds between which it has varied over the course of our lifetime. This belief is well supported by the evidence so when scientific predictions are made that future climate may stray outside these bounds we may well be skeptical.

Our natural psychological proclivity to be skeptical about ‘evidence’, especially evidence which contradicts our beliefs, is in this case highly stimulated by ‘deniers’ claims that the evidence is deceitful; it is produced by ‘junk’ scientific methods or by conspiratorial scientists having self-serving agendas. Indeed climate deniers sometimes claim to be better ‘scientists’ than the scientific establishment.

An overall model of global warming consists of just two component models:
The evidence regarding this model is conclusive. Our best science calculates the probability that global warming is occurring is over 95%. This is not deceitful evidence, it is evidence that has been widely reproduced.

While serving on a research ship during the 1980s and 1990s, I accompanied parties of Canadian scientists who periodically traveled five hundred miles offshore to collect atmospheric samples in the well mixed air far from human activity. These results have been repeated over time and over much of the earth’s surface and in aggregate provide the unambiguous evidence below. 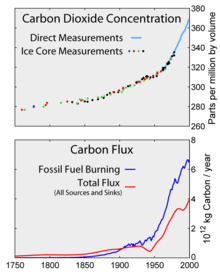 The evidence for the second model demonstrates the manner which increasing concentrations of greenhouse gases raise atmospheric temperatures. This result has been repeated many times by many scientific groups. Indeed an experiment to test this result is regularly performed by elementary school students.

Further we are in a similar position with this model that we were in with the model of the solar system at the time of the discovery of Uranus. Our best physical theories predict that greenhouse gases will cause a rise in the temperature of the atmosphere as these gases better trap reflected radiation. Any evidence that would cause us to throw out this second model would also cause us to throw out our best physical theories.

The global warming model is straight forward and the evidence overwhelming. It is now difficult to even imagine a model which would accommodate the evidence and yet predict that global warming will not occur as concentrations of greenhouse gases rise. However any scientist able to produce such a model along with supporting, reproducible, evidence would enjoy immense status within the scientific community and surely would win a Nobel Prize.

Predictions that temperatures will increase outside of the range we have previously experienced is well supported by the evidence. Appeals to our skeptical inclinations that we should consider the evidence for global warming to be deceitful fail: the experimental outcomes are easy to repeat and have been widely repeated. We are not vulnerable to deception if we base our scientific beliefs on valid evidence.
Posted by John at 09:31