My wife is an oceanographer and a volunteer at the Royal British Columbia Museum. Her current project there is to sort through the vast personal collections of scientific papers which generations of scientists have left to the museum. She discards duplicates or those which may be accessed on the internet and retains and catalogues those that cannot.

Yesterday she brought home a 1975 paper by one of her academic heroes, Wallace Broecker, titled Climate Change: AreWe on the Brink of a Pronounced Global Warming? In this paper, written over forty years ago, Broecker makes the scientific argument that burning fossil fuels will lead to a significant warming of our climate:

We may be in for a climatic surprise. The onset of the era of CO2-induced warming may be much more dramatic than in the absence of natural climatic variations.

His line of reasoning is straight-forward and compelling. It was already well known that CO2 traps heat and warms the atmosphere; elementary school science experiments demonstrate this fact. Such experiments also reveal a strict relationship between the concentration of CO2 in the atmosphere and the amount of heating it produces. It was known that our burning of fossil fuels had already contributed over 12% of the CO2 present in the atmosphere. Putting these straight-forward facts together along with estimates of future rates of fossil fuel consumption he calculated that this percentage would rise to 38% by 2010 and produced a simple model of the consequent warming. 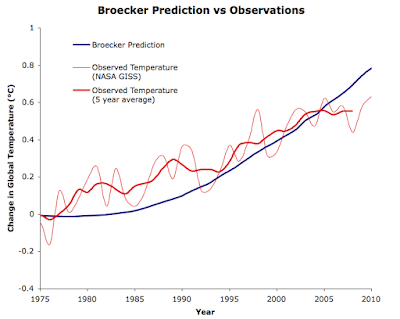 The model which Broecker constructed from these few facts has proven remarkably accurate. Though his model has been greatly refined since, his ominous predictions have largely come to pass; each of the past twelve months has set records for the hottest of those individual months in history.

present thinking holds that man has a time window of five to 10 years before the need for hard decisions regarding changes in energy strategies might become critical.

At the time Exxon’s scientific staff were among the leaders in climate science research. They undoubtedly understood the conclusions very well. In the opinion of the Harvard history of science professor Naomi Oreskes:

Although Exxon did not lack in scientific understanding of the problem posed to humanity by climate change or of the immediacy of the problem, they decided against supporting ‘hard decisions regarding changes in energy strategy’. Instead they focused on a corporate strategy designed to delay those hard decisions, a strategy designed solely to create doubt concerning climate science. Exxon joined with other energy companies to execute this new strategy

By 1989 the company had helped create the Global Climate Coalition (disbanded in 2002) to question the scientific basis for concern about climate change.

The memos produced by this coalition make it clear that their goal was to sow misinformation and confusion:

Victory will be achieved when the average person is uncertain about climate science.

Exxon alone is reported to have spent over $30 million on this disinformation campaign. These vast sums were not wasted; our political process has yet to come to any ‘hard decisions’ on the issue. Indeed, the leaders of the majority party in the US Senate continue to describe climate science as a ‘hoax’.

In a narrow legalistic way Exxon may plausibly argue that they should not be held responsible for these deceptions. Corporate law insists that corporate decisions must be based only on considerations of profitability. Arguments that they should avoid imposing catastrophes on humanity are simply irrelevant to their decision making and undoubtedly their strategy in misleading the public has been profitable for them. It might be argued that their tactics were completely rational. Clearly, if humanity is to display any ability to resists these kinds of corporate threats, we must write new laws.

Some have argued that climate change is not all bad and may not pose much risk to humanity. The science indicates that these arguments are wrong. A recent study by researchers led by Eric Rignot of University of California:

finds a rapidly melting section of the West Antarctic Ice Sheet appears to be in an irreversible state of decline, with nothing to stop the glaciers in this area from melting into the sea.

This melting will result in the world sea level rising 4 feet, sufficient to submerge a lot of the world’s most densely populated shorelines. Ironically one of the most devastated areas will be Florida, where State environmental officials were ordered not to use the terms “climate change” or “global warming” in any government communications, emails, or reports. Unfortunately, such ‘head in the sand’ strategies will not hold back the tides.

The massive 2006 Stern report, commissioned by the government of Great Britain, concluded that immediate action could result in mitigating $2.5 trillion worth of damages resulting from global warming. Given that a decade has since past, during which little action has been taken we may conclude that the actual damages will be much larger. We should bear in mind that these damages will not appear on Exxon’s financial statements; the price will be paid by humanity.

It is difficult to establish the amount of resources which we should rationally allocate to mitigate climate change. The basic calculations of monetary risk assessment is simple enough, it is the probability of the risky thing happening multiplied by the cost of it happening. For example, when calculating the monetary risk of your house burning down next year we must first estimate a percentage of it happening, say 1/1000 and then estimate the replacement cost of your house, say $500,000. Multiplying the two we see that the fair price for insurance against your house burning down in the next year is $500.

It is rational for us to spend such sums to insure our homes even though the probability of them actually burning down is very low.

The problem with calculating the monetary risk of climate change is not with the probability of some sort of a catastrophe happening (that number is undoubtedly quite close to 1) but it is in calculating the expected potential cost. As part of the disinformation campaign launched by Exxon and their allies, the credibility of climate science has been viciously attacked. Critics have hammered away that the science is not certain, that doubts remain. In response the gun-shy scientists have been timid in exploring many of the less certain scenarios where the risks are also much higher. Instead they have felt constrained to explore only the near certain outcomes.

The truth is that science is never certain, any scientific hypothesis must always be falsifiable. However, science is absolutely our best guide in assigning exact probability to a possible outcome. Let’s consider one such possible outcome of unmitigated climate change which is not certain but I would argue has a substantial probability, a higher probability than the one which prompts us to insure our homes. This possible outcome is that planet earth becomes unable to sustain life.

This may, at first glance, seem an outrageous suggestion but we should consider that early in the history of the solar system our planet was but one of three planets having life friendly conditions including liquid water, moderate temperatures and an atmosphere. Science does not know for sure why Venus and Mars subsequently developed conditions which prohibit the existence of life. It appears that on Venus a run-away greenhouse effect may have taken place; today temperatures are so high that lead will melt at its surface.

Could earth follow a similar catastrophic trajectory? It is known that once global warming begins there are a number of feedback mechanisms which tend to speed it up. These include melted, darker polar zones absorbing more heat, the release of the greenhouse gas methane from melting permafrost and increasing concentrations of water vapor (which is a greenhouse gas) as the atmosphere warms. The truth is that once we get global warming going we don’t know where it will end.

The fact that two out of three planets are no longer capable of supporting life must lead us to understand that a life-friendly planet is fragile, and that it could easily loose its precious ability to sustain life. Yet in the tradition of Alfred E. Newman we disrupt and perturb our planetary systems with the full force of our technological prowess while remaining studiously unworried as to possible consequences.

For over forty years corporate disinformation campaigns have resisted humanity’s efforts to mitigate against climate change, to buy ourselves a little insurance. These special interests have achieved victory; the average person is uncertain about climate science and very few effective measures have been taken to curtail it. Although the law is very friendly towards these morally despicable acts, some corporations may have, in their enthusiasm, crossed even the existing legal limits. California is now considering a bill to extend the statues of limitations on such crimes to enable law enforcement to gather evidence to:

hold fossil fuel companies accountable for decades of deception and fraud over the scientific evidence about climate change.

When considering new laws around corporate engineering of public policy we might consider the unprecedented magnitude of the threat these activities pose to humanity. We might consider that terrorist acts are committed when individuals commit crimes against humanity in order to achieve their fanatical objectives. Sometimes those fanatical objectives take the form of religious salvation but they may also take the form of unbridled greed. In this context, steering the citizenry into a climate catastrophe is little different from steering a plane into an office tower. We should make the legal penalties commensurate with the moral magnitude of the crime.