This is an excerpt from the book The Knowing Universe.

concerned with existence, especially human existence as viewed in the theories of existentialism.

Historically our species has tended to view its existence as given and unalterable, and this current interest in existential threats is heartening. Perhaps our view of existence is shifting from a static conception to one more dynamic. Static concepts of existence dominated the western philosophical tradition before Darwin; the consensus view held that all existing things came into existence in a single event and would retain their initial forms until the end. For example, it was a consensus among western intellectuals that God created all species during his seven days of creation and that this original group of species had since remained static.

Darwin's findings compel us to consider existence in a new, dynamic light; existence may have only brief durations even of entire species. Since the beginning, novel entities embodying new strategies have winked into existence and those no longer able to resist natural tendencies towards dissipation have winked out. The current popularity of the word existential might be due to some lingering, justified unease about prospects for our continued existence.

As this book argues, existence is fragile and entirely dependent upon knowledge inferred from the evidence. Cultures are not immune to this winnowing process. Human history documents an unending succession of cultures whose shockingly brief time in the sun is cut short through fatal flaws in inferential abilities. We have cause for worry when dire circumstances outmatch our nascent inferential abilities.

Some aspects of cultural inferences are near flawless. Our many scientific inferences efficiently develop powerful economies and technologies; these scientific models are flawlessly updated with the latest available experimental evidence, becoming ever more powerful. However, other cultural models, especially models concerning our use of technology, are neglected, and there is resistance to updating them with the evidence. Models concerning the usage of technologies form an essential part of cultural regulation, and neglect of these models may pose our most considerable existential challenge.

It is common for entities to wink out of existence when their models for achieving existence fall into error and are no longer sufficient to maintain them within changed circumstances. For example, among the most advanced life forms during the Late Ordovician, Trilobites met extinction due to volcanic release of greenhouse gases and subsequent planetary warming . Trilobites' genetic knowledge for maintaining their existence was overwhelmed by new and unforeseen circumstances. Our cultural existence is not currently challenged by volcanic greenhouse gases but by greenhouse gases whose production is entirely under our control.

During almost all our species history, developing models for the wise application of technology has been relatively straightforward: use any available technology to maximize resource extraction in the service of biological existence. This strategy of maximizing resource extraction was hard-wired into our biological ancestors since the beginning, and the exponential increase in our numbers evidence its success. And our conservative inclinations counsel us not to tinker with a successful strategy. After all, existence is difficult, and if we already have a model that successfully achieves existence, why fix something that is working?

The wisdom of conservative strategies raises the interesting question of when we should alter our basic cultural models. What weight of evidence is sufficient to motivate adjustments to our primary strategies for existence? The short answer is that we should heed the scientific evidence.

Science is by far our most powerful process for understanding the workings of natural systems. Powerful scientific models are responsible for the modern technologies that vastly increase our health and wealth and provide the improved circumstance in which we exist. It only stands to reason that if we are going to use science to alter our world, we should also use science to understand, as fully as possible, the implications these alterations hold for our existence. The failure to correctly apply scientific knowledge to strategies for existence opens the possibility of our extinction. Only scientific knowledge is capable of guiding us through this challenge.

The scientific method is routinely applied as a rigorous inferential system in laboratories and universities worldwide to understand natural processes and employ it as technological applications. Science and technology provide great power, but that power is inherently dangerous to us. Great power tends to provide increased forces towards dissipation, which is as true within the cultural domain as it is in any other. As we have seen, the only way great power can be compatible with existence is through efficient regulation discovered through careful inferences. One of my mother's wise sayings that have stuck with me is:

Fire is a good servant but a bad master.

Fire is an example of a great power bestowing great benefits, but if we have a fire in our homes, it is best contained in a stove where it can be regulated and held subservient. If we allow it to burn unconstrained outside of the stove, it follows an independent trajectory, one that may threaten our existence. Given that human actions are now the most powerful influences on our planet, we must model their effects as accurately as possible and regulate our actions so that our planet's future states provide for our existence.

Perhaps the primary obstacle preventing us from coming to grips with our predicament is a predilection for outmoded biological values such as resource accumulation and status. These values emerge as strivings for wealth in a cultural context, and although science and technology could easily provide sufficient resources for all, we remain obsessed with these strivings. Societies have become structured to facilitate competition for wealth, and this competition has concentrated wealth in a small portion of the population, often known as the one percent. 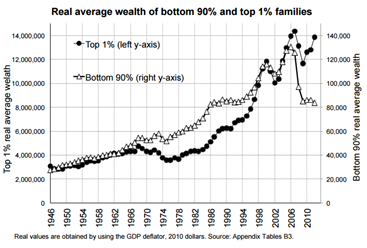 Within the US, for example, the top 1%, now own much more wealth than does the bottom 90% of the population, a concentration of wealth and power that Pope Francais lambasted as obscene:

The earth, entire peoples and individual persons are being brutally punished. And behind all this pain, death and destruction there is the stench of what Basil of Caesarea called "the dung of the devil". An unfettered pursuit of money rules. The service of the common good is left behind. Once capital becomes an idol and guides people's decisions, once greed for money presides over the entire socioeconomic system, it ruins society, it condemns and enslaves men and women, it destroys human fraternity, it sets people against one another and, as we clearly see, it even puts at risk our common home.

His last point, implicating current levels of wealth inequality as a risk to our common home on mother earth, deserves some unpacking within the context of existential threats.